How to Clean Data: {janitor} Package 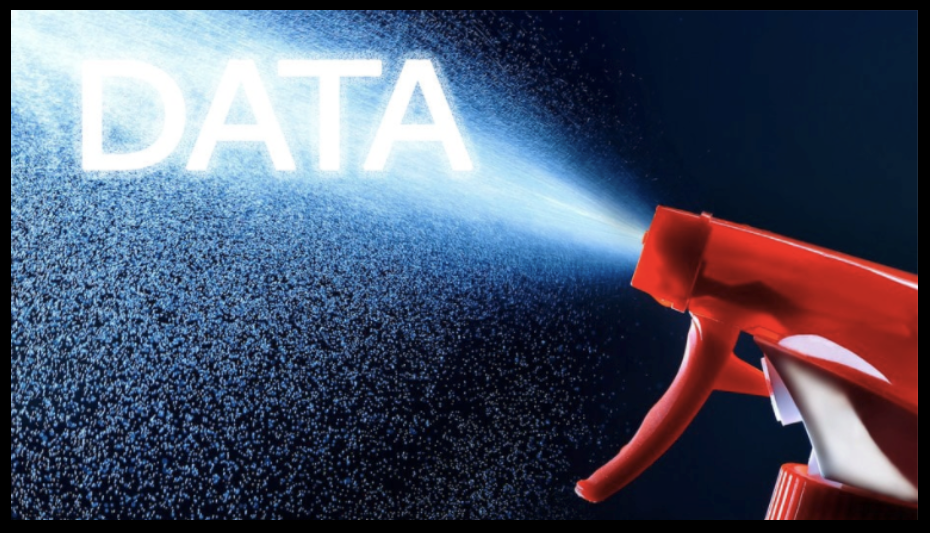 “Exploring-Data” is a blog in which I share easily digestible content aimed at making the wrangling and exploration of data more efficient and more fun.

Sign up HERE to join other subscribers who also nerd-out on tips for exploring data using R.

Click on these links to see where I am improving my skills in handling data using R:

When I discover new and helpful functions I light up 💡 with excitement.

Interestingly, I have a pattern of finding one or two useful functions in a {package}, but rarely explore further to discover other useful functionality.

That’s what this New Series is all about - Exploration.

In each post, I will share a bit about how I was using a {package} and then use a case-study to highlight other functionality I discovered to be useful.

Leave a comment at the end to let me know if you like this style of post. The feedback will be considered in determining the direction of this series.

This a wonderful {package} built by Sam Firke.

Take the time to explore the Github Page for the {janitor:package}, where Sam describes it as follow:

janitor has simple functions for examining and cleaning dirty data. It was built with beginning and intermediate R users in mind and is optimized for user-friendliness. Advanced R users can already do everything covered here, but with janitor they can do it faster and save their thinking for the fun stuff.

There are many more functions (20+) in the package that we will not cover - head over to the following page to learn more about them: Overview of janitor functions.

The case-study will provide and illustrate the following:

Imagine being tasked with doing an analysis on Starbucks coffee locations. Your manager has provided you with raw-data from coffee chains and requested that you:

To streamline your efforts and get swiftly to making that map, you decide to leverage the {janitor:package}.

Let’s Get Some Data

For our case-study we are using data from the Tidy Tuesday Project archive.

When working with new data, I’ll typically setup up a pre-processing step at the beginning of the script. It typically starts out with no steps and then they get added as I move through my analysis.

The idea is that as you conduct your Exploratory Data Analysis (EDA), you will discover pre-processing steps that need to be added to your pipeline.

In this post, I’ll illustrate this technique by adding to our pipeline as we go; however, this data pipeline would live near the top of the script and would not move.

Save raw data to a variable.

Immediately save the raw data to new variable labeled with the suffix, processed.

This obviously has ZERO pre-processing done to the data at this point. The point though is that as you discover areas of your data that require attention, you then can circle back to this pipeline and add those steps.

This may seem odd, but the beauty comes in not having to get further along in your analysis before realizing that you need to do data cleaning steps; if you approach it that way, then you have to go back and rename your variables created along the way - this method allows you to keep working with your processed data as you move swiftly through your analysis.

Begin Exploring your Data and conducting your analysis.

At this point, I’ll do a bit of EDA to familiarize myself with the data I’m working with; this process is always to get a high-level understanding of the data so that I can pick up on nuances along with data integrity issues that need attention (dealt with in the pre-processing pipeline).

Let’s look at these raw data using the tibble::glimpse() function.

Immediately, we can see that our column names are not optimal for analysis. Personally, I’m VERY biased towards snake_case and therefore always like to get column names into that format.

In comes {janitor::clean_names} to the rescue ⛑️

By default, clean_names() outputs column naming with the snake_case format - maybe this is one of the reasons that it’s in my top 10 for favorite functions in R.

Let’s test it out on our coffee data.

If you prefer a different naming convention - I’m not sure why you would 🙄 - then you can use the case argument.

Now let’s add this step to our pre-processing pipeline.

get_dupes() is at the top of the list for newly discovered functionality within the {janitor} package.

This is one of those things you need to do often (check for duplicates) and {janitor} makes it simple.

Going back to our case-study, our manager asked us to check for duplicated records (a common data-cleaning and EDA step).

Let’s subset our data and investigate.

Look carefully and you’ll notice that the latitude/longitude are missing for one of these records.

We need lat/long for mapping and so we will want to prioritize the records with those data. Also, we don’t want duplicated records to interfere with our tabulations later on in this analysis.

Let’s quickly look and see how much data is missing from the lat/long columns.

The plot shows that 0% of data are missing for lat/long leading me to believe that the store identified earlier is the only record with missing data (insignificant amount when plotted).

We will filter that record out in our data-cleaning step.

Now let’s add this step to our pre-processing pipeline

Let’s use get_dupes() to confirm the problem is solved

Now that we’ve done our due diligence in being sure we’ve dealt with data issues, let’s knock out this analysis by tabulating these data and compiling a map, or two 🤓

Before doing so, let’s add one final step to our pre-processing data pipeline.

The final step is to subset the columns needed to complete the analysis.

janitor::tabyl stuck out to me because the ease with which to generate frequency tables.

Using just the tabyl function we were able to generate frequencies along with the percent of total.

However, {janitor} is packed full of other goodies - the creator(s) have crafted a number of adorn options for formatting our outputs. I used the adorn_totals and adorn_pct_formatting to tidy up and make our table ready for presentation.

All Starbucks are either company owned, which is almost all of them, or else they’re “licensed” locations, which are the Starbucks in airports, supermarkets, etc. - Charles Partrick

Now lets make those maps and get this analysis wrapped up.

Lets start by getting a general sense of where in the US these Starbucks are located. 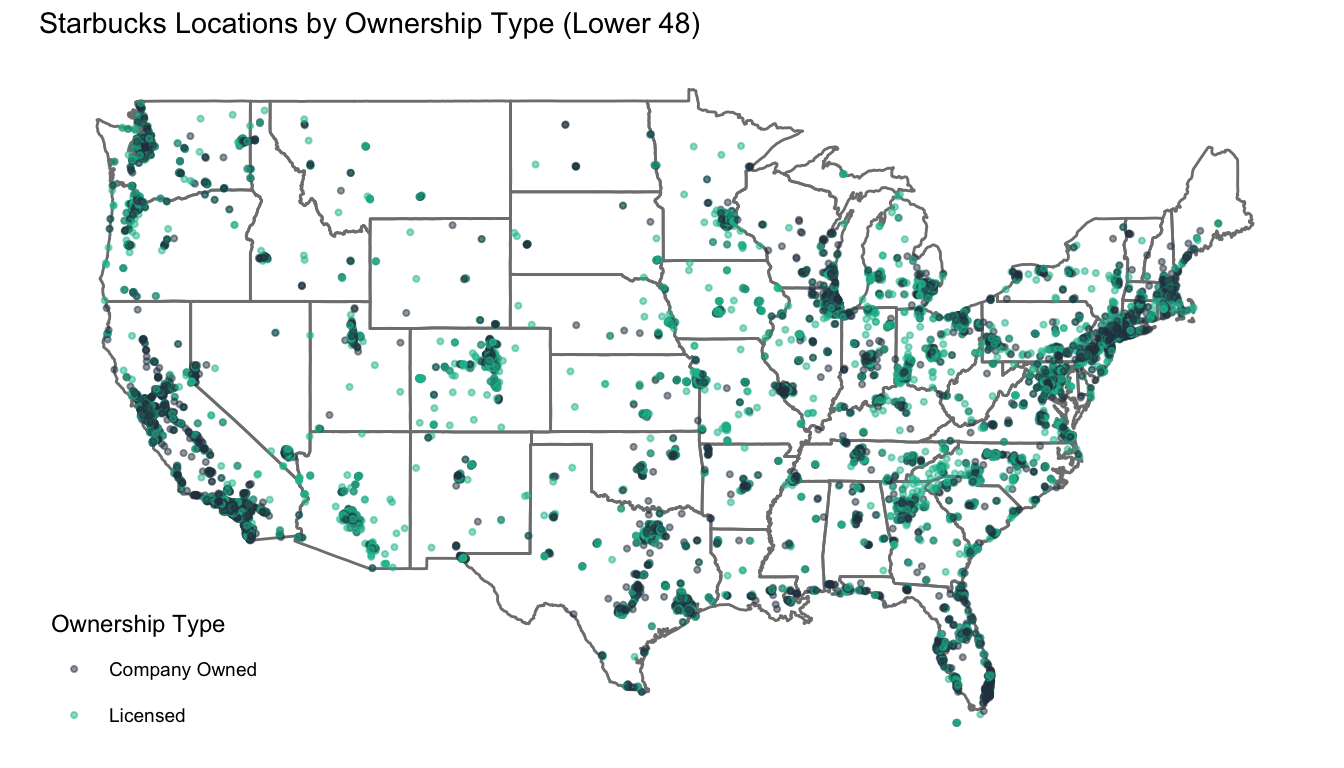 That’s a solid map but I think we can do better to identify patterns in ownership types.

Let’s calculate the ratio of Corporate (Company Owned) vs. Licensed ownership and map that at the state level. 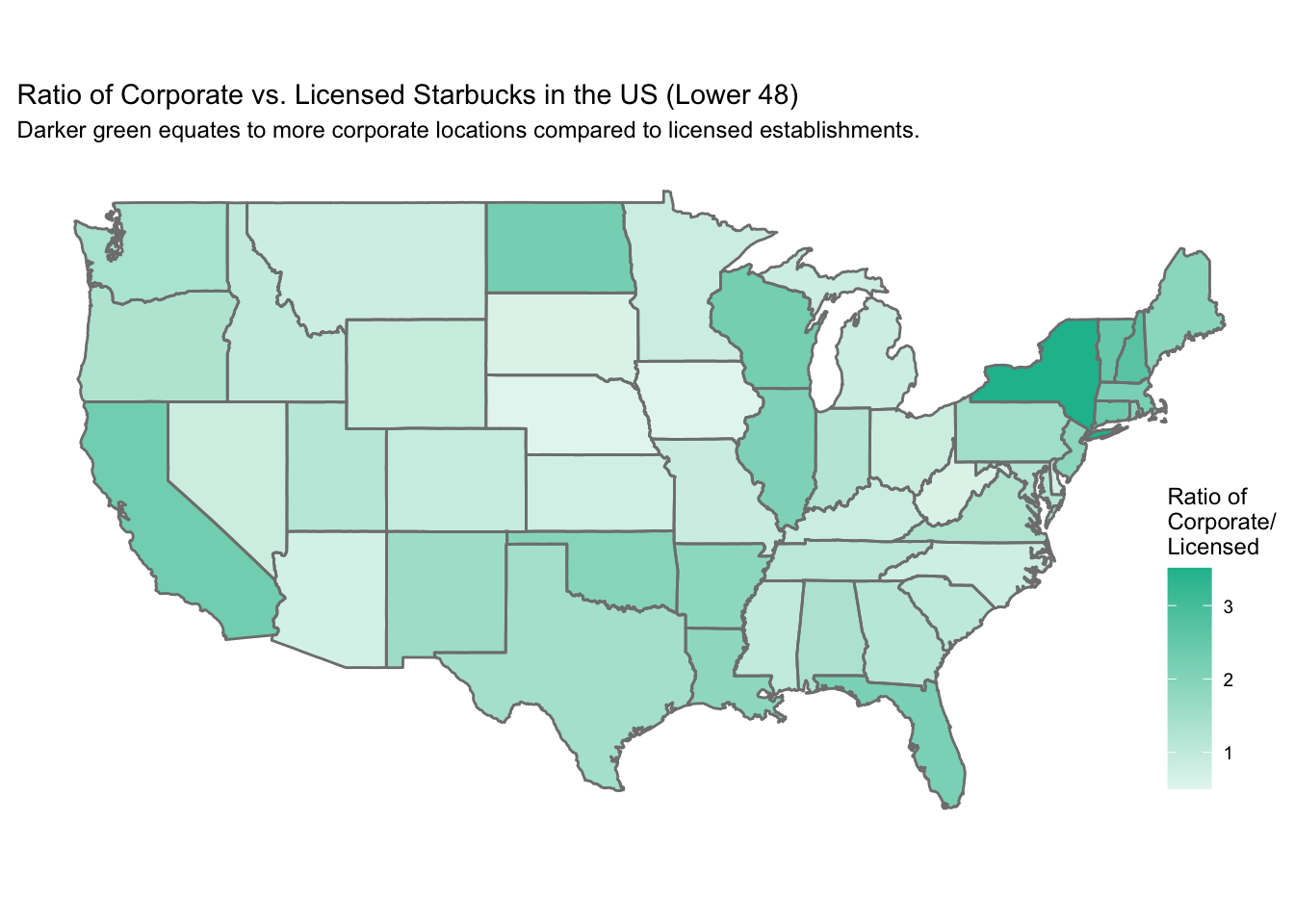 I hope you enjoyed the first post in this new series.

Get the code here: Github Repo.

Enter your Email Here to get the latest from Exploring-Data in your inbox.

PS: Be Kind and Tidy your Data 😎

PSS: Leave a comment to help guide the subsequent posts in this series.

Join me on the journey.

Check out this link to get 15% off of the courses that are helping 1000s of analytics professionals take their careers to the next level: Business Science Courses

How to Explore Data: {DataExplorer} Package